Against the odds, China’s exports surge

This was supposed to be the year that China’s export machine began to stall, given Trump administration tariffs on Chinese goods, factories shut down by the coronavirus crisis and countries pushing companies to shift their logistics elsewhere.

But China has come roaring back. After the country started reopening businesses in late February, factories’ exports soared across sectors, reaching their second-highest level ever in July.

China’s share of global exports rose to nearly 20 percent in the April to June quarter of 2020, up from 12.8 percent in 2018 and 13.1 percent last year, according to IHS Markit, a global data firm.

Contrast in India: The economy contracted by 23.9 percent in the second quarter, the most drastic fall in decades, as restrictions to prevent the spread of the coronavirus wiped out jobs and businesses. That showing is the worst among the world’s top economies. The construction, manufacturing and transit industries were among the hardest hit.

Here are the latest updates and maps of the pandemic.

Thousands of ethnic Mongolians in northern China have gathered outside schools to protest a new policy that would reduce teaching in their language in favor of Chinese, according to rights groups, a rare display of mass discontent in the border region.

Many residents participating in the protests, which began last week, see their language as one of the last surviving markers of their cultural identity. Images of peaceful protests were quickly scrubbed by censors.

Inner Mongolia’s regional education bureau tried to allay worries, issuing a statement on Monday vowing to limit changing the language of instruction to only three subjects: language and literature; politics; and history. But parents say they will keep their children home from school.

Quotable: “We Mongolians are a great race as well,” Dagula, a 39-year-old mother of two, said in a telephone interview from her home in Inner Mongolia. “If we accept teaching in Chinese, our Mongolian language will really die out.”

Indian Army officers and security analysts said Chinese troops landed a few days ago on the southern side of Pangong Tso Lake, in the remote Ladakh region, which traditionally has been considered Indian territory.

Soldiers from the two sides at the disputed border rushed to shout in each others’ faces before being pulled apart. No one was injured, analysts say, but neither side is backing down.

China was emphatic it had done nothing wrong, blaming the Indian side for “blatant provocation.”

Takeaway: Despite diplomatic activity to defuse tensions after a bloody, lethal confrontation between Indian and Chinese forces in June, the disputed border remains a flash point in an increasingly nationalistic era.

If you have 15 minutes, this is worth it

It has been a year of tragedy and catastrophe, a year that has inflicted one blow after another. Our reporters chronicled the lives of five people in the U.S. caught in this year of upheaval and pain.

Here’s what else is happening

Indian Supreme Court: The court on Monday handed down a symbolic sentence — a fine of about 1 cent — to a prominent lawyer who posted tweets critical of the court and its chief justice. The case was widely seen as a test of free expression in the world’s largest democracy,

Australia-China relations: Investigators in China have detained an Australian journalist working there as a host for Chinese state-run television, adding another potential point of friction in testy relations between the two countries.

Lebanon: In a rushed process meant to show progress, the country’s president tapped a little-known diplomat, Mustafa Adib, to form a government that will have to address an economic meltdown and the aftermath of the Beirut explosion.

In memoriam: Pranab Mukherjee, 84, a journalist turned politician who was India’s president for five years. He had undergone brain surgery in recent weeks and also tested positive for coronavirus. Though he never became prime minister, his ability to build consensus made him indispensable.

Featured video: Above, a 3-year-old girl who got entangled in a kite’s tail during a festival in Taiwan. She was swept into the air for a heart-stopping 30 seconds. But don’t worry — she landed safely.

What we’re reading: Vulture’s profile of Mariah Carey. “It’s astonishing,” says Taffy Brodesser-Akner, a writer at the Magazine. “I’m kind of speechless. I don’t know, but I can’t stop thinking about what Allison P. Davis did here.”

Now, a break from the news

Go: Take a virtual tour of Malawi, known as the “warm heart of Africa.”

Deal: Keeping a journal can be a little like therapy, and provides a chronicle of our times. Here’s how to get started.

Looking for new ways to entertain and feed yourself and your family? We have lots of ideas in our At Home ideas, including recipes, book and movie recommendations and more.

And now for the Back Story on …

The coming U.S. presidential election is being portrayed by both President Trump and his Democratic challenger, Joe Biden, as a battle for the soul of the nation. Rachel Dry, the deputy politics editor at The Times, held live panel discussions with Times political reporters after both the Democratic National Convention and the Republican National Convention.

It seemed like the Democratic National Convention tried to reach a lot of different demographics. What kind of party invites both John Kasich [the Republican former governor of Ohio] and Riley Curry [the 8-year-old daughter of N.B.A. star Stephen Curry]?

ASTEAD W. HERNDON: This convention and the Biden campaign have basically made the choice that they could be for everyone, that they don’t have to pick a segment of the population that they’re going to zero in on. That’s partly because they have a candidate who can appeal to different groups through the personal or the political.

Katie, was there one moment you were thinking about as you watched Biden’s speech, after covering him during the primary?

KATIE GLUECK: I had this moment last fall where I’d been with him for quite a long time in Iowa, and the speeches were a little low on energy. He is someone who tries so hard to connect with audiences, and for a variety of reasons, it was not working for him there. And then I went with him to North Carolina. He was speaking to a crowd there, and he was a different candidate. He was so energetic. The crowd was responding to him, and it was a reminder that, depending on the environment, he absolutely can bring that energy.

Matt, you wrote about why this campaign worked for Biden — it was his third run for president over more than 30 years. Why was this the moment?

MATT FLEGENHEIMER: In ’88, he ran on a personal integrity message, despite his relative youth. In ’08, as the kind of elder statesman senator, he ran on experience and foreign policy knowledge. That didn’t work either.

In some ways he’s marrying those two in this campaign. There is the steady hand statesman who has seen it and done it and knows all the players. And there’s this dominant frame around his own integrity, all the losses he has suffered, all the resiliency he’s demonstrated.

That’s it for this briefing. See you next time.

Thank you
To Theodore Kim and Jahaan Singh for the break from the news. You can reach the team at briefing@nytimes.com.

P.S.
• We’re listening to “The Daily.” Our latest episode features a Black police officer in Flint, Mich., talking about what it means to be part of the police force in his hometown.
• Here’s our Mini Crossword, and a clue: Nut for a squirrel (five letters). You can find all our puzzles here.
• On Sept. 4, watch “The New York Times Presents,” our documentary series, as our reporters investigate what happened in the fatal shooting of Breonna Taylor in Kentucky. 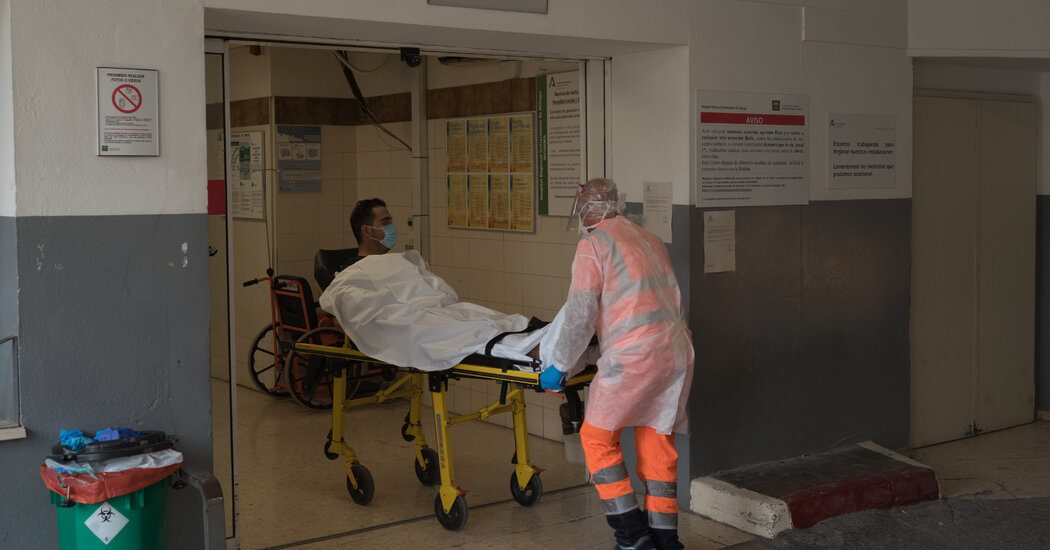